I must be crazy. Yep, that’s got to be it. It’s 17° in New York and I am standing in line an hour before the famous Dominique Ansel Bakery opens and for what? A donut? Nope! A croissant? Not quite! It’s the Cronut- a sweet, crispy, deliciously-filled fusion of the two that has swept the world by storm. It seems as though everyone has tried to come up with their own version of the Cronut, but as I’m sure we all have learned, nothing is as good as the original. Since the novelty has yet to wear off, I figured I would give it a try.

I woke up early and hopped in an Uber from Midtown to Soho. I was familiar with the street (I’ve tried coming before but it was a FAIL), but for some reason I just knew I had gotten it wrong. There was no line! Could this be the same place that people line up for near 2 hours prior to opening? Were they closed for some reason and I just didn’t get the memo? Thankfully, 2 other sweet-crazed souls were there- a father and son braving the cold on their annual retreat from Long Island for their favorite treat. 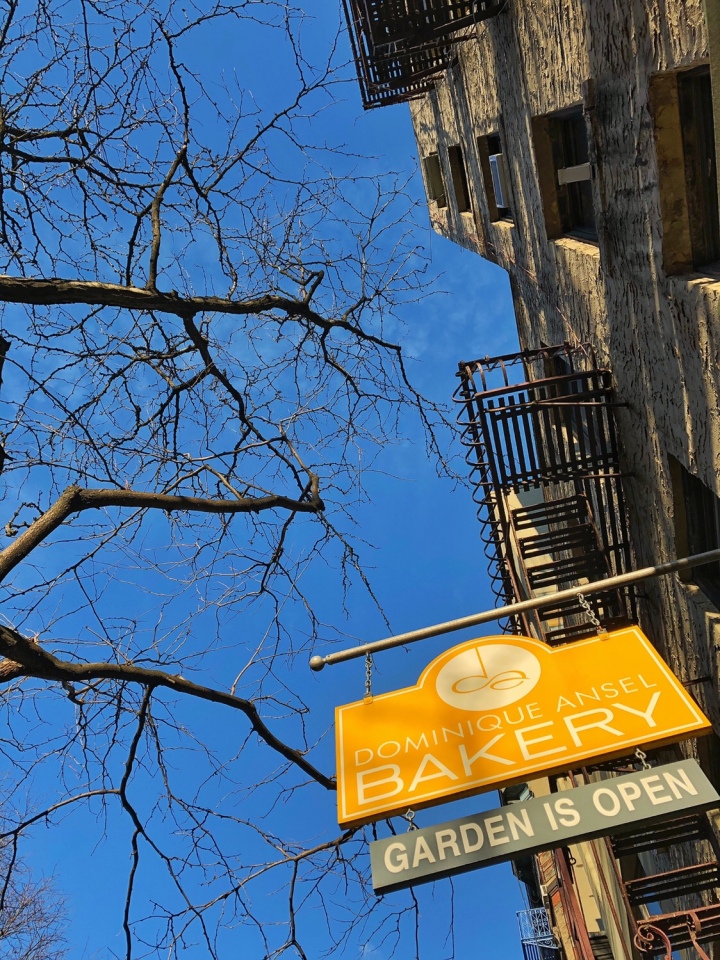 It was cold, but I’m from Chicago so I can handle anything, right? Maybe not. After I began to think about how cold my fingers were, an employee from Dominique Ansel brought out 2 packs of Hot Hands for each of us in line. I was shocked! I’ve waited in the cold for many things and never have I experienced customer service like that. After I waited for those to fully kick in, shortly thereafter they brought out Madeleine cookies for myself and those that started to form in line behind me. Wow! That surely helped the hour fly by. When the clock struck 9, their doors opened and an employee came out and gave us the scoop on what to expect and pumped us all up for the featured Cronut of the month… Pear Chamomile.

After the doors opened, we filed inside. The line moves pretty quickly since the Cronuts are already in perfect little boxes. I grabbed an apple cider to get warmed up since I couldn’t try their famous blooming hot chocolate (which I’ve heard is AMAZING). Unfortunately, I don’t like chocolate and the apple cider I could have done without. It tasted like warm apple juice and was missing the amazing spice element that truly makes it cider. There’s ample seating so I grabbed my Cronut, a knife and fork, and dug in! Now, they suggest using a knife with a serrated edge to cut into your Cronut and I don’t think a dull, plastic knife is what they had in mind but that’s all they had and this thing was too big to just pick up and eat. It was love at first bite and truly was the ultimate sensory experience. There were so many crispy, flaky layers making it everything you could ever want out of a French croissant. Yet, the pear jam and chamomile ganache filling oozed the mildest sweetness and everything you would ever want out of the perfect donut. Yep, my sweet tooth was satisfied!

While I was in line, that father and son told me the last time they were there, a professional line waiter was braving the elements to get Cronuts for J. Lo. If paying for someone to do the dirty work is not your thing, you can skip the line and order ahead (Note: It has to be done weeks in advance because they sell out FAST).

Only about 200 Cronuts are made per day. I’d say by the time they opened, there were about 50 people in line behind me and you are only allowed 2 Cronuts at a time (Do the math and save yourself a wait).

Cronuts have a shelf life of about 6 hours. I’m sure it’s to ensure the flakiness of the pastry- so don’t plan on bringing these home to your family and friends in Denver, they’ll be no good.

The Cronut is good, service impeccable and if Cronuts aren’t your thing, the other desserts are sure to satisfy any sweet tooth. Is it worth waiting in line 2 hours? No! It’s just the hype but that’s what makes it fun. I was fortunate to get there on a day that no one was in line. I could have come 15-30 minutes before opening and been just fine. So if the line is short, hop on in, but you can skip getting there 2 hours before they open unless J. Lo herself is handing out the flavor of the month! Enjoy!

Hi everyone! I’m Jordan Lane. I'm an attorney that loves to travel, eat and experience the beautiful things life has to offer. Now get ready for a walk in my lane!
Follow In Jordan's Lane on WordPress.com