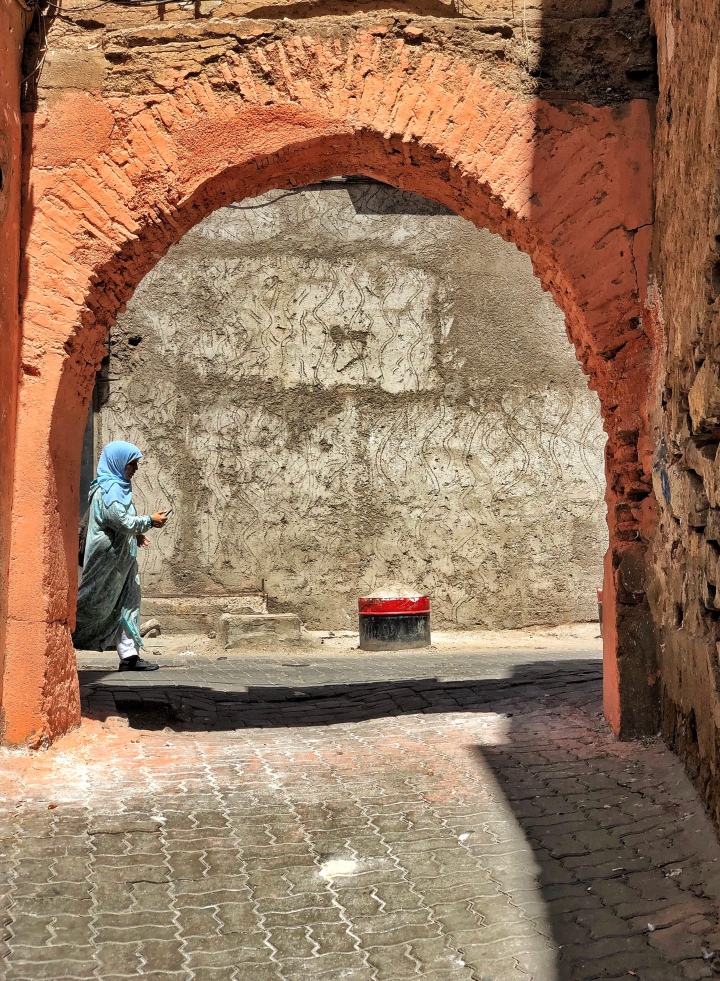 The souqs of the Marrakech medina have a certain aire of mystery about them. Maybe it’s the brown haze from the dust pick up of the motorbikes whizzing by. Maybe it’s the glimmers of light that peek through the thatched, makeshift roof above head. Or maybe it’s the labyrinth of endless corridors and narrow alleyways that prevent even the most seasoned tourist from ever retracing their footsteps.

Marrakech is certainly magical, but not in the way that the photos of Instagrammers posing in couture gowns in front of lamp shops would make you think. It’s quite far from a magic carpet laden Disney fairytale. It’s dirty. It stinks. It’s crowded in parts and it’s chockfull of salespeople. It’s totally overwhelming to the senses. But in a strange way, that’s what makes it so special. The best way to enter the medina is with an open mind, receiving every nugget it has to offer. I hope this guide gives you some useful tips and information as you prepare to embark on your journey.

1) Alright, I’ll start with what is likely everyone’s first question… is it safe? Yes! Yes, it is! I read countless tales of harassment and discomfort experienced by numerous female travelers in Marrakech. As a solo, female traveler, I tried not to let the negative comments shape my mind about what was to come before even stepping off of the plane. With that said, I sought to experience the medina on my own. Allowing myself to get lost, go off the beaten path, and wander in my own time and my own way. I would HIGHLY recommend doing it on your own, but I get it’s not for everyone. If you’re feeling uncomfortable about getting lost, hire a guide for a few hours. You can arrange a guide through your riad or ahead of time though a website like Viator.

2) If you choose to go it sans guide, make sure your phone is fully charged so that you can make use of your GPS. Google Maps works perfectly and will help you find your way back to your riad. Let me tell you, even those with the most keen sense of direction will still get incredibly lost. Here’s a tip: Mark your riad on the map before you leave out. Allow yourself to get lost and explore and just pull out your phone to help guide you back. Make your way back before the sun starts to set. Many alleys don’t have have power at night and it will be almost impossible to find your way in the dark. Head in before sunset. Note: GPS is not perfect as most of the narrow alleyways are not on the map, but you can sure as heck use it to tell if that little blue dot marking your location is traveling in the direction of your riad.

3) On the subject of getting lost. Try not to take directions from someone unless you absolutely need to. No matter how nice they seem, you will likely be asked for a tip for their efforts to provide you direction services. Unfortunately, when people asked if I was lost, I just ignored them. If you are desperately lost, either negotiate a price for their services beforehand or keep some small bills on you to give as a tip.

4) Bring lots of cash! I probably shouldn’t disclose this but whenever I travel I always withdraw a lot of cash. I take out about $700 USD and exchange a few hundred at a time into the foreign currency. Most places in the medina don’t take credit cards. Always have cash so you can be extra prepared. There are also a number of currency exchanges within the medina if you run out of Moroccan Dirham while doing a bit too much shopping.

5) Alright you’ve probably been waiting for this part. The shopping! Oh, the shopping. Intricately woven wool blankets, leather babouches in every color imaginable, shiny lamps in brass and silver, wood carvings, leather poufs, clothing, I could go on and on. Each shop is entrancing and seemingly draws you in with their wares.

Now there are people who go to the medina and not buy a thing, let me tell you, I was not that girl! I bought ev-er-y-thing in sight! Literally just throwing it all in the bag. Tip: Bring a little reusable shopping bag to easily carry your treasures around while you shop. Leave room in your suitcase and pack a foldable tote or duffle to use as another carry on for stuff you buy.

6) Given the maze of the medina, you likely won’t pass the same shop twice. Here’s the thing about the medina, while every shop is spectacular, you will find after spending a few hours there, the shops begin to repeat. The shops are essentially all the same, carrying the same goods, just with different owners. With that said, you don’t need more than a few hours to spend in the medina. If you love something and the shop owner won’t give you a good deal, you will for sure find the item again at a different price. Story time: I fell in love with a set of the most beautiful, embroidered pillow cases. I was quoted 130 dhs for ONE pillowcase and the owner was only willing to come down to 120 dhs. I left the shop because the owner wouldn’t negotiate and couldn’t stop thinking about these beautiful pillowcases. But, there was no way I was ever going to find that shop again. I got discouraged and went into every shop that I saw selling pillowcases. I saw a lot of pillowcases that were similar but none identical. Then, I FOUND THEM at a completely different shop and I paid 160 dhs for TWO! Moral of the story… Don’t overpay, just walk away. You will find the same item again and likely for a better price.

7) Alright, let’s talk negotiation. Prices in the medina aren’t necessarily “cheap” or affordable. Nothing has a price tag so when the merchant senses you’re a foreigner, you get quoted a drastically inflated price. What do you do?! Well the experts say making an offer 25% of the quoted price is likely the true price of the item. Since I’m no math wiz, I usually aim to start negotiations at slightly under 50% of the starting price.

Now, taking this approach may not always work. I had some owners scoff at me and refuse to lower the price by any amount. While others were willing to negotiate and settle for fairly close to my starting price. Here’s an example: A man told me 120 dhs final offer down from 150 and scoffed that I would offer anything less. Another owner bartered with me from 450 down to 150. If you really want something and the owner has been negotiating with you, act like you’re leaving. They will meet at your desired price more often than not. As with any negotiation, where you start impacts where you end.

Owners will try to tell you an item is one of a kind. It’s not. Feel confident in walking away if the price is not right. You will find the same thing again no matter how “unique” it may seem.

English is widely spoken throughout the medina, but a little French and Arabic get you far when negotiating.

8) Alright what should you wear? A significant majority of the population are Muslim. While you don’t need to be covered from head to toe, out of respect, try to cover your shoulders and knees. I preferred maxi dresses and linen pants/shirts, but I saw a number of tourists in the medina in halter tops and short shorts. Would I recommend? Definitely not! But either way, if you are dressed in “western-style” you will still stick out as a tourist.

9) Alright time for a reality session. I want to talk about a popular topic I’ve seen in many Marrakech forums. Harassment, racism and catcalling. Those things happen EVERYWHERE! I can honestly say no one made any sexual or race based comments. I was followed for a few seconds by a man in the medina trying to sell me something but I ignored him and he eventually gave up. Obviously people are of different schools of thought on this, but if you ignore any calls for your attention or business or directions, you remain in your own space and don’t allow yourself to become “vulnerable.” This is an important rule for traveling, period.

10) Lastly, photos. One thing I learned before I left that really stuck with me is that many people in the Medina do not wish to be photographed or included in any photo. It’s culturally disrespectful. Since locals are everywhere in the medina, I found it hard to grab good shots while remaining respectful. Many shop owners won’t want you to take photos in their shop/of their wares unless you purchase something. Be cognizant of that while aiming for that perfect Insta shot.

While you’re there: Drink lots of mint tea, get lost wandering, practice your French or Arabic, visit a traditional hammam, eat tajine, watch a snake charmer in the medina, buy a one-of-a-kind rug and have it shipped back home, visit a tannery to see the leather making process, take a cooking class and simply enjoy the wonder that is Marrakech.

Hi everyone! I’m Jordan Lane. I'm an attorney that loves to travel, eat and experience the beautiful things life has to offer. Now get ready for a walk in my lane!
Follow In Jordan's Lane on WordPress.com